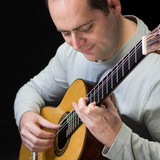 Classical musician from Buenos Aires, Argentina. He is currently living and studying in Zürich, Switzerland, doing a Master’s Degree program in early plucked string instruments at the ZHdK with Eduardo Egüez. He studied in Buenos Aires with Marcela Sfriso and Eduardo Isaac. As part of his training, he also took several courses and seminars with renowned guitarists, such as Pablo Márquez, Eduardo Fernández, Walter Ujaldón, and Miguel de Olaso. In the last ten years, he was featured regularly as a soloist and with different ensembles in the main concert halls in Buenos Aires city, such as CCK, Usina del Arte and Centro Nacional de la Música. He has also performed in Paraguay, Switzerland and Italy. In 2009 he founded the Camerata Argentina de Guitarras (guitarist and Artistic Director 2009-2019). In 2014 he released his first solo album "Morro de Saudade”. He has made national and international premieres of Latin-American composers such as Leo Brouwer and Javier Farías, with an ensemble and as a soloist.