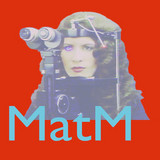 Martha and the Muffins

Featuring Martha and the Muffins

Based in Toronto, Martha and the Muffins initially comprised Martha Johnson (vocals, keyboards), Martha Ladly (vocals, keyboards, trombone), guitarist Mark Gane, bassist Carl Finkle, drummer Tim Gane, and saxophonist Andy Haas. The group formed in 1977 and, on the strength of their debut independent single, "Insect Love"/"Suburban Dream," were signed by Virgin U.K. The band's debut album, Metro Music, appeared in 1980, led by "Echo Beach," which would become a new wave classic. After 1981's This Is the Ice Age, and Danseparc two years later, Johnson and Gane moved the outfit to England and recorded Mystery Walk (1984) and The World Is a Ball (1986) as M+M. From then on, Martha and the Muffins recorded sporadically, releasing Modern Lullaby in 1992 and Delicate in 2010. ~ John Bush, Rovi