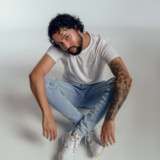 "It is a rare discovery to find one who is so calculated with the art."—HYPE Magazine, The Freshman Edition 2017. Through his extensive attention to fine detail and sonic versatility, rapper and music producer ZULO, formerly Lil Trix, has since solidified his position as one of the most autonomous artists in South Africa. Born and raised in the south of Johannesburg, ZULO developed skills in areas he lacked as an artist including production, design, and directing and editing his own music videos. He would later craft his own website and album cover arts, which are frequently graced with his cartoon bunny mascot Tricky, the Bunny, often depicted in different poses. ZULO gained recognition after being signed to rapper Blayze's record label Blayze Entertainment and released his star-studded single "Red, Black & White" after scoring some early chart-toppers on both YFM and 5FM, and was named one of HYPE Magazine's Freshmen in 2017. ZULO's sonic spectrum is typically described as synth-heavy with a fusion of boom bap and modern trap, while generally making use of distortion coupled with melodic raps and occasional singing. ZULO's content is predominantly personal and uplifting, littered with South African coloured slang, humour and pop-culture references, while frequently addressing heartbreak. Extracting the first 2 letters of both his name and surname, ZULO continues to evolve as a creative while investing in his craft, eager to globalize his musical palette.