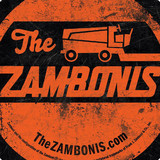 The Zambonis are the greatest (and only) ALL hockey band in the world. Since 1992 they have written songs about hockey, love, life and hockey. with a concept/theme like this, they should suck. They don't. From The New York Times, Rolling stone, Sports Illustrated, NPR, ESPN, NHL On NBC, they all love this band. Zambonis have played Stanley Cup games, NHL All Star games/events, toured with Guster, opened for Rhett Miller of The Old 97's, Barenaked Ladies, The Ventures, Jonathan Richman, Los Straitjackets and many more. The original line up was Dave Schneider, Peter Katis, Tarquin Katis and Jon Aley. Peter Katis got out of performing live with the band in 2002 due to his success as a record producer (Interpol, The National, Kurt Vile and another 100 or so artist)

Tarquin tried to leave the band but he still pops on stage and occasionally records with the guys. Jon retired in 2016. Like a hockey team a hockey band has many players. The current starting line is 14 year member Cary Pollick, Alex Swift and Rich Dart (The Monkees drummer since 2012)