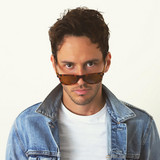 Chaser is a Canadian Mexican musician, music producer, and DJ. He primarily produces in the Electro House genre but has branched out drawing in influences from Progressive House and Pop Music. Being part of massive events such as EDC Mexico, Empire Music Festival Guatemala, Life In Color Mexico, Dreamfields Festival Mexico, Beyond Wonderland Mexico, Ibiza Residence by EMPO, Mayan Madness Festival and sharing the stages with artists such as Tiesto, Skrillex, Nicky Romero, Zedd, Don Diablo & Alesso to mention a few. Chaser has won several competitions such as Discovery Project Mexico 2014 by Insomniac with his single “Top Of The World”, Best DJ EDM 2015 by the DJ World Awards, one of the 6 finalists at EDMBiz 2015 by Insomniac with his single “Stadium Love”, beyond others. www.chasermusic.com