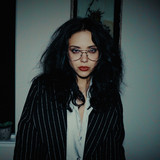 It’s been an intense few years for singer/songwriter/multi-instrumentalist/producer Alexa Melo. In June of 2015, the Massachusetts-born, L.A.-raised artist independently released her self-titled debut album. A series of West Coast concert performances got industry tastemakers talking, acclaim from the blogosphere began to build, and support from major market radio programmers across the country soon followed.   But just as things were ramping up, emergency surgery on her vocal chords grinded the momentum to an untimely halt. After a full year of vocal rest – pure agony to a performer as prolific as Melo – she slowly got herself back into the swing of things in 2016, recording a series of cover songs to post on YouTube, garnering over a million YouTube plays in less than a year.   Alexa moved to San Francisco in the summer of 2017 to begin a vigorous search for inspiration, to continue rebuilding her spirit and to create a new sound of her own. In a short few months she wrote and produced her second release, the four-song MUTE EP. "Hollow", the EP's powerful single, garnered regular airplay on tastemaker San Francisco radio station KITS-FM (ALT 105.3). The station included Alexa in their Top 10 Bay Area Artists of 2018 and 2019.  2020 saw the release of DEMOÏTIS, a collection of demos Alexa has had on file, and in October 2021 she'll put out her highly-anticiapted new album RED NOISE with several singles leading into its release.