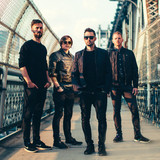 Keywest is a multi-award winning, multi-platinum selling independent artist from the UK and Ireland. They are a 4 piece band that has created an infusion of folk, rock and pop. They began playing on the cold streets across Ireland "busking" initially just to survive and pay the rent. However from their first performance in this environment it was evident there was something special was happening, the band began pulling crowds and blocking up streets everywhere they played. This had not been seen in Ireland since U2 started playing on the streets way back. Keywest is now officially Ireland’s biggest independent act and looking take their sound globally