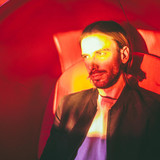 slip is the musical project conceived by taylor brown, an artist from los angeles who has been making music in indie rock bands for a decade. this music is his own —

the inevitable result of taylor quietly experimenting by himself for all those years. what we have now is the beginning of a project that sounds both dangerous and hopeful — dusty, ominous trip-hop animated by pulsing psychedelia; basslines that stick to deep grooves like peanut butter; all buoyed by an on-the-brink narrative. taylor released his debut LP 'the cost' in November of 2019. it was co-produced and mixed by jules de gasperis and mastered by howie weinberg.