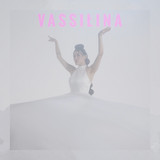 Originally from Greece and based in London, VASSIŁINA composes pieces that balance pop aesthetics with dark electronic influences. She presents a live punk melancholic soundscape, with references from synth-pop and avant-pop; as well as the post-punk British and French scene. With intense reverb, delay, field-recordings, and interactive visuals VASSIŁINA stumbles between chaos and dance music.   In March 2018 she released her first EP, In-Sōma with Undo Records, followed by the singles Pain and Blue House. In 2019, she presented her music-art project "Fragments” at the Anglican Church of Saint Paul in Athens and at the Albany Theatre in London, UK, and within a year she completed two European tours, playing around the UK, Greece, and Italy.   She released her debut LP “Fragments” by Inner Ear Records in May 2021.