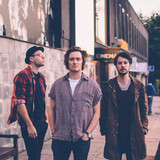 WULF brainchild of pianist and Beatles fanatic J. Bowyer, released their debut EP Lairs via BMG UK in 2015 produced by one of the UK's hottest indie pop producers James Kenosha. The trio including London based Bowyer, drummer J. Gardiner and Perth Australian native S. O'Neill, recorded throughout 2014/2015, returning to the studio in 2020 to finish their latest upcoming EP. 2021 is set to be a year of new music for the London trio with new single 'Never Giving Up' which showcases the bands' charismatic blues-tinged vocals and infectious pop melody. The trio have been keeping themselves busy, not only with writing and recording remotely, but also with living. After a few years filled with the highs and lows of late-twenties life, from marriages to rehab, the band are reflecting on a period of intense self-doubt, having taken a growing-pains hiatus. Not wanting to end up in landfill indie, the band are driven to make music that stands the test of time, nodding to Beatles fanatic Bowyer and timeless writing as seen on their debut EP ‘Lairs’, and by their cited peers Cold War Kids, Bombay Bicycle Club, Hozier, Band of Horses. “Wholesome indie-pop” - Line Of Best Fit “W U L F, in New Zealand we would pronounce that WALF" - Zane Lowe "You'll be hearing a lot about these guys" - Alice Levine "trident, confident songwriting matched by no small degree of daring" - CLASH www.wulfband.com