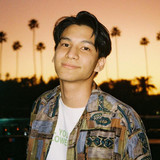 Phum Viphurit is a 26 year old singer/song-writer based in Bangkok, Thailand. Raised in New Zealand since the age of 9, his love for laid-back music began there and continued into his adulthood as he began writing and releasing music with Rats Records, an independent label based in Bangkok in 2014. His musical style can be described as a mixture of cultures and colours, portrayed in a mellow, up-beat yet intimate combination. His first LP, Manchild (2017) included the sleeper hit, 'Long Gone' which would launch the beginning of his international career. This was followed by the EP, Bangkok Balter Club (2019) which included Hello, Anxiety and the lead single, Lover Boy, a track that has since gained over 100 million streams on Spotify and Youtube combined. Touring both in 2018 & 2019, Phum and his travelling bandmates have toured Asia, North America and Europe, playing live houses and halls to festivals such as Summer Sonic (Japan), Tropicália (USA), Westward Music Festival (Canada), Sziget Festival (Hungary), Off Festival (Poland) and many more. Phum is currently actively collaborating and preparing for his upcoming LP. Please do enjoy his discography for now, new music is on its way.