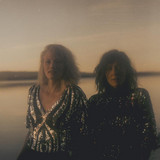 Americana-inspired Swedish duo Good Harvest was formed in 2010 by singer/guitarists Hanna Enlöf and Ylva Eriksson, who had met at the age of 15 in their hometown of Falun when they both joined the same folk-pop band. Immediately recognizing one another as kindred spirits, they bonded over a shared love of Simon & Garfunkel, Nick Drake, Joni Mitchell, and Gillian Welch. When the band dissolved, they decided to continue as a duo, quickly going from covering their heroes to writing their own material. Both superb vocalists and instrumentalists, they forged a rich, warm, intricate country-folk style, characterized by gorgeous vocal harmonies and thrilling intertwined fingerpicking, which sounded much larger than the work of just two people. They built a solid reputation through playing live before self-releasing in 2014 their debut EP, Bottom Dollar, which was extremely well received. They kept the momentum going with a number of digital singles, and played shows at the massive festivals SXSW and Stockholm Music & Arts. Along the way they also played for the King of Sweden, performed on national TV, and won Newcomer of the Year at the Dalecarlia Music Awards, which celebrated artists from their home province of Dalarna. In 2016 Good Harvest signed to Roxette guitarist Per Gessle's artist-centric Space Station 12 label and released their cover of the Joni Mitchell classic "Woodstock." The track was a viral sensation, with a live-in-the-studio video version shared on their Facebook page accruing nearly two million hits in two weeks. The single "Charly" followed the same year, and their debut full-length album, In a Life and Place Like This, in 2017. Produced by Erik Berglund (Solen, Many Voices Speak), it saw them joined by bassist Svante Henryson and drummer Björn Sima to fill out their sound. ~ John D. Buchanan, Rovi