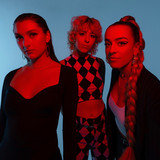 Scattered across the outskirts of Western Australia, three girls discovered their fathomless passion for music. Ashleigh Carr-White, Timieka Denton, Saskia Brittain didn’t all know each other then, but it was only a matter of time before the inexplicable forces of the universe would have them cross paths. In fact, Saskia and Timieka became friends when they were just toddlers, while they first met Ashleigh during their high school years.   Between impromptu jam sessions at Saskia’s place and studio rooms, the girls worked tirelessly to define their indie pop-inspired style. Instead, they arrived at the conclusion that their soaring hooks and inventive melodies simply could not be confined to the limits of one genre. Dulcie’s sound is an amalgamation of their individual musical influences.   Of course, Dulcie isn’t just defying normality in terms of genre. Their idiosyncratic style immediately turned heads at triple j and Ocean Alley dubbed their soulful debut single “Fall” their favourite track of 2019.   Dulcie are set for a busy 2021 & they are eager to leave their mark on the Australian music scene.