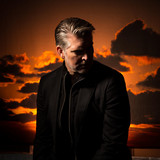 Songwriter and world class Baritone David Britton’s musical and personal backgrounds are as unique as they come, and it’s that eclectic combination of influences and experiences that have shaped the unmistakable and powerful sound he is known for today. David's style blends complex rock orchestration with big vocals, often backed by a gospel choir. Raised abroad by missionary parents, David first developed his passion for music and diverse cultural styles while traveling with them around the world, learning Dutch, Italian, French, and German along the way. David eventually discovered a love for opera while studying voice at Westmont College where he was also a drummer in a rock band, and continued refining his vocal skills post grad, earning his Master’s in Vocal Performance at the San Francisco Conservatory of Music. With more than twenty roles in his catalogue, David has sung at opera houses and concert halls around the world, including Carnegie Hall in the world premiere of The Dawn of Japan with the Orchestra of St. Luke’s. Now residing in Phoenix, AZ with his family, David has released four albums, the most recent of which is “The Storm”, a reflection on the human condition and an expression of the daily physical, mental, emotional or spiritual battles we face. “The Storm” was created as an attempt to embrace that very real struggles exist in the world, while also acknowledging that despite that pain, there can be moments of real peace and tranquility.