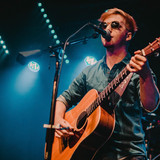 The first time anyone hears Ethan Senger perform, they are never prepared for the level of guitar mastery or the warm, mature voice that comes out of this looks-younger-than-he-is, 21-year-old musician who has been performing in the metro Atlanta area since he was 7. A native of Woodstock, Georgia, Senger has just released his self-titled, debut EP, which consists of four songs that tastefully blend hints of all the music genres that have inspired him over the years — pop, rock, and singer/songwriter. His music influences include John Mayer, the Goo Goo Dolls, U2, Rob Thomas, and Marcus King.