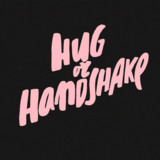 hug or handshake is an indie rock/pop duo consisting of Petar Trifonov and Anton Georgiev. They formed the band on a cold December night when they found out they listened to the same kind of music and their minds spoke the same language. Their debut track 'Molten Dreams' was released in March 2020 amid overwhelmingly positive feedback from major media outlets in Bulgaria. Second single 'Blaze of Sorry' came out later in the year and was described by the band as "the soundtrack of nostalgia over a love that never happened in a time that never was." With the help of Monyx (Simeon Lozanov), hug or handshake's debut album 'Once Upon a Pink Sedan' was released on 17 May 2021. Described by friends and industry professionals alike as a "a beautiful and emotional journey from the first thrills of love to those moments when you wonder if a half-hearted hug or a handshake would be the more awkward choice", the album will be accompanied by a series of interactive music videos which will be released throughout the rest of 2021.