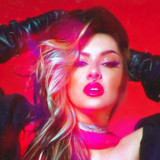 Rising pop star, latin fierce diva, Bellsavvy. Recently introduced by Billboard & Billboard pride with her fiery song "In My Zone" produced by the multi-platinum producer 'Sky Adams'( Doja Cat Boss Bitc*), the singer-songwriter, and performer has a solid musical identity and knows well how to combine her Latin roots with her European influences to create a unique catchy sound unlike any other.   All about self-empowerment and self love, the artist that is based in London, Bellsavvy debuted her first single “ Queen Of My Mind, being played multiple times on big radios like BBC Introducing and RTL.   Called “the new fierce diva of 2021” by the international press, being premiered on “Hollywood Life”, GAYTIMES, Wonderland Magazine,Pop Dust, PopWraped and many more, Bellsavvy likes has been showing all she got on fiery songs produced by multi-platinum producers like Sky Adams ( Doja Cat) and David Lei Brandt ( Lady Gaga).