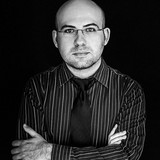 A passionate musician since childhood, David Gonzalez is an accomplished composer based in Los Angeles whose work has appeared in both television and film. Mesmerized by John Williams' scores to the original Star Wars trilogy as a child, David began writing his own compositions in grade school. He eventually found his way to the film scoring department at Berklee College of Music, where he earned his BM in Film Scoring. Now in Los Angeles, David has put his skills and passion as a composer to good use in a variety of projects. From feature films like Working Man, starring Oscar-Nominee Talia Shire, Peter Gerety (The Wire), and Billy Brown, to commercials for Rit Dye, David's music enriches and enlivens the pictures on the screen. His work can also be heard on Switched at Birth and How I Met Your Mother, helping to bring these popular small-screen stories to life. David's rousing energy about writing music across all genres, as evidenced by his work composing for movie trailers, wedding processionals, video games, rock bands and special events. Collaborating with the other creators on the project is a key element to his success. Their insight is an invaluable part of making the music work in the context it's needed.