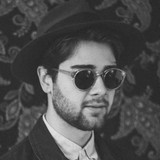 As SQRD, Swedish producer Carl Robin Kirchmann writes introspective, melancholy downtempo electropop. All his songs are written, recorded and produced by himself. He subsequently after his two EP releases enjoyed hundreds of thousands of plays and mentions by music critics in magazines and radio. Emboldened by his early success, he began to work his second EP, Gold, which was released in 2016. His first and second EP was released on his own record label “fresh milk”. SQRD eventually signed to Swedish indie label “Sommarhjärta”, which would release his latest single “Together”.