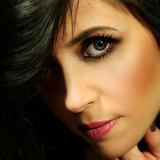 Jill Winter grew up surrounded by music and at the age of 14 was playing the bar and club scene of NY. Being a versatile musician, both instrument wise and stylistically, she had opportunities to play in various bands (Charting NMW and Gavin Top 40) and opened for many National and International Acts such as Eddie Money, Lucas Prata, Twisted Sister, Bret Michaels, Jason Bonham and more. Jill has recorded with a grammy award winning producer and played many world renowned venues, including, Roseland Ballroom, Webster Hall, B.B. King's, The Best Buy Theater, as well as many festival stages. Currently, Jill has launched her solo career and added lead vocals to her repertoire, with the release of her first single 1978 which has been remixed by two Billboard Charting Producers 1978 [Disco Radio Edit] (Klubjumpers Remix)1978 [Radio Edit] (Peter Monk Mix) as well as other releases which are influenced by her love of Pop, Dance and Rock music.