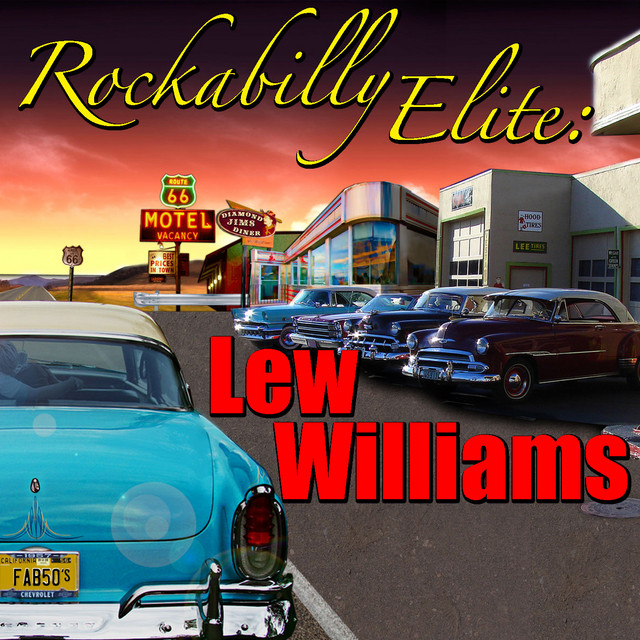 Dubbed "the Cab Calloway of rockabilly" by historian Bill Millar, Lew Williams is one of the unsung heroes of early rock & roll, celebrated for a jazzy, sinuous style unique among his contemporaries. Born January 12, 1934, in Chillicothe, TX, Williams began his amateur singing career at the age of four. In 1945 his family relocated to Dallas, and after graduating from high school he made his professional debut playing country music in local clubs. Around this same time Williams began developing his own original songs, and even though he entered Wichita Falls' Midwestern University in the fall of 1952, by year's end he headlined a twice-weekly radio program on Frederick, OK, station KTAT, additionally playing live dates on weekends. Whenever he returned to Dallas to visit his family, Williams spent his idle time working as a gofer at Jim Beck's recording studio, a nexus for aspiring country musicians and major-label acts alike. If time remained at the end of a session, Williams was often offered the opportunity to cut one of his songs, and as a result his earliest demos were recorded with some of country's most sought-after session players at his disposal. After signing to the Flair label, Williams officially entered Beck's studio in June 1953 to cut his debut single, "I've Been Doin' Some Slippin' Too." The record was not a hit, and the results of a follow-up session from October went unreleased. Williams nevertheless submitted a handful of his songs to Imperial Records founder Lew Chudd -- the track "Cat Talk" impressed Chudd enough to extend a publishing contract, although he withheld a record deal until Williams delivered additional material of the same caliber. During this time the singer regularly appeared on WFAA's Saturday Night Shindig, broadcast live each week from Dallas' Texas State Fairgrounds -- it was here that Williams began incorporating elements of jazz and R&B into his music, and for his next session at Beck's studio in June 1954 he assembled a band featuring honky tonk piano, saxophone, steel and rhythm guitars, bass, and drums, marking a radical departure from the straight-ahead country of his earlier efforts. He sent Chudd a re-recorded "Cat Talk" as well as three other songs, but Imperial had no idea what to make of the tapes and declined; Williams dropped both the steel guitar and the saxophone for his next session, and finally in mid-1955 Imperial signed him to both recording and writing contracts, issuing his label debut, "Don't Mention My Name," in early 1956. "Cat Talk" finally appeared as a single that summer, but after two more outings -- "Bop Bop Ba Doo Bop (Classroom Hop)" and 1957's "Centipede," both cut in Hollywood with producer Jimmie Haskell and featuring Barney Kessel on guitar -- Imperial terminated Williams' contract in the face of virtually nonexistent sales. After graduating from college in the spring of 1957, Williams focused his energies on songwriting -- with Mae Axton, he co-authored Jimmy Hughes' single "Junior High Doll," and also cut the demo of her "Sea Sand" that convinced Ferlin Husky to record an official version of the tune. On his own, Williams penned material for Porter Wagoner ("Your Love"), Floyd Cramer ("Mumble Jumble"), and Hoyt Johnson ("Sylvia"). A member of the Texas National Guard, in November 1957 he began a mandatory six-month stint with the U.S. Army; upon his May 1958 discharge, Williams signed to Dot Records, adopting the alias "Vik Wayne" for "The Girl I Saw on Bandstand," his lone effort for the label. He retired from performing the following January, a few months later opening Le-Drene Productions, a recording studio and talent agency he operated with partner Adrene Bailey. By 1963 Williams was out of music altogether, opening a mail-order business and later expanding into publishing. In 1998, he learned that his Imperial sides were now available on CD via the Bear Family label, and his music was the focus of much attention from rockabilly fans and collectors throughout Europe and Japan. At the Viva Las Vegas festival in 2000, Williams made his first headline appearance in over four decades, and he continued performing for years after. ~ Jason Ankeny, Rovi