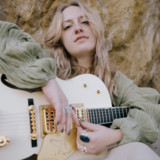 Althea describes her music as pop, but not modern pop, “more like The Faces or The Beatles were called pop”. Althea has been playing top festivals and venues in Chicago, The Midwest, and beyond for the last five years, including opening for Arc Angel’s own Doyle Bramhall II on tour for nearly a year and a half. Althea has been featured numerous times in regional newspapers, radio, and TV outlets, like Daytrotter who’s writer said “Althea's songs have a maturity to them that is scarce in even the legacy songwriters still active today”. Althea has opened for American Idol finalist Bucky Covington, grammy-winning artist Leann Womack, and on many occasions with the multi-Grammy-winning band Los Lobos. She was featured on the Los Lobos version of the Shins’ song “The Fear”. When she’s not on stage, she’s in the studio writing for artists like Doyle Bramhall II; her most recent writing credit being Doyle’s song “Everything You Need” featuring Eric Clapton.