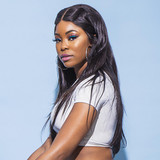 Confident and driven, there’s no denying Kansas City native Mia Kodak brings a fresh, creative spark to the scene as an up-and-coming hip-hop artist. Fresh off her debut EP, Mistakes and Heartbreaks Mia tells her stories with an urgency that reveals a gritty honesty and a deep understanding of overcoming life’s challenges. Influenced by artists such as Nicki Minaj, Drake, Fabulous and more, Mia doesn’t limit herself musically and explores her artistry through other genres, such as R&B, pop, dancehall, and soft rock. Whether she’s freestyle writing in the car working her day job, writing meaningful lyrics at home, or working nights in the studio, Mia’s creative energy knows no bounds. That energy started as a young girl growing up, where she was often seen carrying her camera, earning her the nickname “Kodak.” As the middle child of three, Mia lived a pretty normal life until her father was incarcerated for drugs. This left her mother to raise her and her siblings by herself, and was a turning point for Mia, giving her the impetus to put her thoughts and feelings into lyrics. She wrote and performed “Dear Mama” as a dedication to her mother. Mia attended the University of Central Missouri and graduated with a degree in broadcasting media. When she’s not pursuing her craft, Mia enjoys bowling, playing basketball, and hiking. She lives in Los Angeles. Mia is set to release her new album towards the end of 2020.