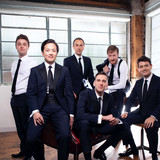 The King’s Singers were officially born on May 1st 1968, formed by six recently-graduated choral scholars from King’s College, Cambridge. Their vocal line-up was (by chance) two countertenors, a tenor, two baritones and a bass, and the group has never wavered from this formation since. 2018 marks the 50th birthday of the group, and to celebrate, The King’s Singers are presenting their anniversary season: GOLD. Everything in this GOLD season, from triple-album to book and concert tour, celebrates the amazing musical heritage of The King’s Singers, and also looks at the bright future of vocal music in all its forms. The group has consistently been welcomed on the world’s great stages – from London’s Royal Albert Hall to the Opera House in Sydney or New York’s Carnegie Hall. Two Grammy® Awards, an Emmy® Award, and a place in Gramophone magazine’s inaugural Hall of Fame sit among the accolades bestowed upon the group. This love of diversity has always fuelled The King’s Singers’ commitment to creating new music. A panoply of commissioned works by many of the supreme composers of our times – including Sir John Tavener, John Rutter, Luciano Berio, Nico Muhly, and Eric Whitacre – sits alongside countless bespoke arrangements in the group’s extensive repertoire. The world may have changed a lot in the fifty years since the original King’s Singers came together, but today’s group is still charged by the same lifeblood – one that wants to radiate the joy singing brings every day.