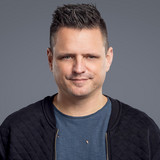 Raoul van Grinsven, otherwise known as Zany, is the definition of a Hardstyle legend. One of the original pioneers of the style, a member of the notorious Donkey Rollers, and an ever-present force pushing the genre through evolutionary trajectories, Zany was at the start and isn’t going anywhere. Supreme classics like ‘Nothing Else Matters’, ‘Pure’ and ‘Widowmaker’ have been routinely added to with modern hits, such as ‘Free For All’ with Ruthless. Furthermore, Zany has two studio albums to his name, the genre defining ‘The Fusion of Sound’, and the more recent ‘Planet Zany’. For well over a decade, Zany has been performing at the top of the scene - he has played at every major Dutch festival multiple times, and at a host of massive international events. Why? Quite simply, a Zany performance is guaranteed to get the party going. A combination of on stage energy, a dj’s eye (or should that be ear?) for progression, and a classy mixing style has always been the foundation of his performing success and little has changed over the years. Approaching the genre with a freestyle mentality allows Zany to evolve the genre once again, reminding us all that Hardstyle is fun and diverse - these is no better man to spark this change.