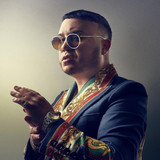 Jory Boy is the solo alias of Fernando Sierra, co-founder of Puerto Rican reggaeton duo Nova y Jory. Born in Puerto Rico in 1986, he moved to the United States with his family at age ten, growing up in Camden, New Jersey. He began creating music as a teenager, and appeared on several talent shows and competitions. In 2003 he met Fernando Gonzalez (Nova), also a Puerto Rican transplant and aspiring musician, and the two began collaborating, writing songs about the hardships they faced growing up. Their first mixtape, Por Encima, arrived in 2007, and they collaborated with many prominent reggaeton artists including Wisin & Yandel, Yaga & Mackie, and Jory's cousin Zion. Following a few more mixtapes, the duo's proper debut album, Mucha Calidad, arrived in 2011. The duo broke up in 2012, and both members concentrated on their solo careers. After numerous solo singles and collaborations with artists such as Trébol Clan and Ñengo Flow, Jory Boy made his full-length solo debut in 2015 with Matando la Liga, an Auto-Tune-heavy album of slickly produced love songs. A year later, in December 2016, he followed up with Otra Liga which featured guest spots from fellow Puerto Rican artist Ozuna and Colombian star Maluma, among others. After releasing standalone singles "Nada Serio" with Almighty and "Zombie" with Ñejo in late 2017, Jory has announced that "Otra Liga 2," the follow-up to "Otra Liga," is to be expected in mid-2018.