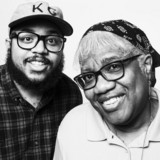 Madisen Ward and the Mama Bear

With a penchant for wildly original songs drawing from timeless American genres such as roots, folk, Americana, and blues, the duo of Madisen Ward and the Mama Bear has risen from the coffeehouse circuit of their Midwest hometown of Independence, Missouri to international and festival sensation, releasing two albums and an EP in the five short years of its existence.

Including 'Started With A Family' on September 6, 2019. Tracked at Blackbird Studios in Nashville, and produced by Nathan Chapman, the 10-song set features a bare, stripped-back approach, with just the two and their guitars; what Madisen calls “unpainted music.” And while the pair will continue to augment their live performances and future recordings with accompaniment that ranging from a single cello to a full band, they are simply, in the words of Mama Bear, “a couple of American folk artists out on the road.”