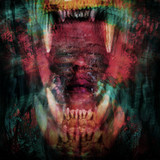 Bloodspot from Germany essentially celebrate the raw and dark side of thrash metal. Defying the narrow conventions of the genre, the band constantly endeavours to expand the emotional scope of their sound and include elements from an increasingly extensive array of different genres. Since their inception in 2006, Bloodspot have come a long way and are now undoubtedly a force reckoned with in the German and international metal underground. So far, Bloodspot have unleashed four releases (one EP, three full-length albums), sporting a mix of thrash and death metal with an unmistakable hardcore edge to it. After a couple of breaks and changes, the lineup has been steady since 2017 and more willing than ever to cross stylistic boundaries and create the band‘s very own, distinctive sound. The familiar thrash/death-melange blends with a sombre and raw punk attitude and a grinding, doomy heaviness, creating a menacingly multi-faceted vehicle for the socially critical messages about global mechanisms of exploitation, oppression and greed. Bloodspot continue to be unabashedly honest. Image and scene conventions have never had any place in their no-frills attitude. It’s all about groove, brutality, darkness and love.