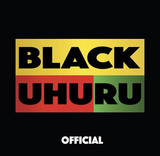 The most successful of the second-generation reggae bands, Jamaica's Black Uhuru maintained their high quality despite numerous personnel changes throughout their many decades together. The first reggae band to win a Grammy award, for their 1983 album Anthem, Black Uhuru offered a dynamic and progressive sound during their 1970s and early-'80s heyday. Led by mainstay Derrick "Duckie" Simpson, a reunion of the group's earliest lineup enjoyed renewed critical acclaim in the early '90s with albums like Now and Strongg before fragmenting into warring factions and a lawsuit that earned Simpson possession of the band name, which he continued to use into the new millennium on 2001's Dynasty. Aside from some collaborative appearances between Simpson and '80s-era member Michael Rose, the remainder of the 2000s yielded only rumors of a long-awaited Black Uhuru album, As the World Turns, which wouldn't see the light of day until 2018. The band, whose name comes from the Swahili word meaning "freedom," was formed in 1972 in the Waterhouse district of Kingston by Simpson, Don Carlos, and Rudolph "Garth" Dennis. Initially playing under the name Black Sounds Uhuru, they eventually shortened it to its more familiar version five years later. When the group experienced difficulties securing a record contract, Spencer left to pursue a solo career and Dennis joined the Wailing Souls. Simpson, who remained the thread throughout Black Uhuru's evolution, reorganized the band with Errol "Jay" Wilson and quivery-voiced lead vocalist Michael Rose. Accompanied by the rhythm section of drummer Sly Dunbar and bassist Robbie Shakespeare, who would become the pioneering production duo Sly & Robbie, Black Uhuru created a sound that made them a match for any reggae ensemble. Their debut album, Love Crisis, released in 1977, included the anthemic hit "I Love King Selassie." Three years later, the album was remixed and released as Black Sounds of Freedom, the first under the Black Uhuru banner. With the addition of harmony singer Puma Jones, an African-American woman who held a Master's degree from Columbia University and was a former member of the female group Mama Africa in 1981, Black Uhuru entered their most commercially successful period. In addition to recording a critically lauded sophomore studio album, Red, and an exciting live album, Tear It Up, the group reached its peak with the release of Anthem in 1983. Remixed for release in the United States, the remade version was re-released in Europe shortly afterward. Although the album received a Grammy for Best Reggae Recording, internal problems caused the band to splinter the following year. Rose was replaced by soundalike Junior Reid. Jones and Reid remained with the band until 1989. Although Reid left when visa problems prevented him from touring, Jones, who was replaced by Janet "Olufunke" Reid, was forced to step down after being diagnosed with cancer. She died on January 28, 1990 and was buried in her home state of South Carolina. The original three members -- Simpson, Carlos, and Dennis -- reunited at the beginning of the '90s to record a successful string of albums as a trio. Beginning with 1990's Now, Black Uhuru enjoyed a renewed period of commercial and critical success rivaling their heyday a decade earlier, logging three more Grammy-nominated albums in Iron Storm (1991), Mystical Truth (1993), and Strongg (1994). By 1996, however, the band had again fractured with Simpson and dub poet Yasus Afari using the band's name in Europe and Carlos and Dennis simultaneously touring the U.S. as Black Uhuru. Following a legal battle, Simpson won ownership of the name in 1997 and relaunched the group yet again, this time with Jennifer "Nyah" Connelly and Andrew Bees. This version of the band managed a pair of albums including Unification (1998) and 2001's highly regarded Dynasty, which revisited the band's early-'80s sound and included Sly & Robbie. Things remained relatively quiet for the band in the 2000s, with Bees returning to his solo career in 2003 and Simpson joining up with '80s-era singer Michael Rose to tour as Black Uhuru feat. Michael Rose for several years in the middle of the decade. In 2012, after years of rumors regarding a new release, Simpson, Bees, and singer Kay Starr completed sessions for an album that was to be called As the World Turns. It was later discovered that the master files for the recording had been corrupted, leaving all but one track unusable. They soldiered on for a few more years, with young reggae singer Jojo Mac briefly joining the band between 2014 and 2016. With Simpson and Bees fronting the group, Black Uhuru re-corded the long-delayed album and As the World Turns finally saw release in 2018, 15 years after their previous studio album. ~ Craig Harris, Rovi