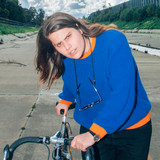 'Spike The Punch' out now! A celebrated talent with a sardonic streak and a flair for crafting melodically charged and relatable pop-punk anti-anthems, Alex Lahey first broke through in 2016 with her hit song ‘You Don’t Think You Like People Like Me’. Since then she’s clocked up over 50 million streams on DSPs worldwide, dropped two Top 30 ARIA Albums, been nominated for ARIA and AIR Awards, placed four tracks in the Hottest 100, appeared on late night TV shows in the US, (including The Late Show with Stephen Colbert in June for her collaboration with Gordi on ‘Dino’s’) and even popped up on a billboard in Times Square. Her global appeal has seen her music covered by Pitchfork, The Guardian, Stereogum and The Line Of Best Fit, and appear on cult games including Tony Hawk’s Pro Skater.