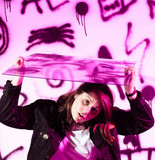 An Australian singer/songwriter with a sardonic streak and a flair for crafting melodically charged and relatable pop-punk anti-anthems, Alex Lahey broke through in 2016 when her song "You Don't Think You Like People Like Me" earned her awards and positive press both at home and in the United States. On her first full-length album, 2017's I Love You Like a Brother, Lahey showed off her knack for energetic guitar-based tunes with equal portions of hooks and attitude, while 2019's The Best of Luck Club found her mixing up her performances with a wider range of influences and tempos. Citing a wide array of artists as influences, including the Killers, Paramore, Dolly Parton, and Bruce Springsteen, Alex Lahey was born in Melbourne on July 30, 1992. She started playing both guitar and saxophone when she was 13 years old, and studied art and jazz when she first enrolled in university. She soon put her academic focus strictly on art, but kept up with music by joining a local band called Animaux, in which she sang and played sax. As Lahey became more interested in songwriting, she left the band to become a solo artist. She submitted one of her songs, "You Don't Think You Like People Like Me," for the Josh Pyke Partnership, a talent search to support promising Australian songwriters, and in 2016 the song beat out 200 other entries to win the prize. Just as important, later that week the online music journal Pitchfork named the song Best New Track, giving her music international exposure. After Lahey won the Unearthed prize for new artists from Australian radio network Triple J, Lahey's first EP, the five song B-Grade University, was issued by Caroline Australia Records in August 2016, and she hit the road as opening act for Tegan and Sara. The American indie label Dead Oceans struck a deal with Lahey in January 2017 and promptly reissued B-Grade University in the United States. October 2017 saw the international release of Lahey's first full-length album, I Love You Like a Brother, which received positive reviews in the United States and the Antipodes. Lahey launched her first North American tour a month later, which included an appearance on the chat show Late Night with Seth Meyers. Following more touring in Australia, Lahey returned to the studio and began work on her second album, the more mature and eclectic 2019 release The Best of Luck Club. ~ Mark Deming, Rovi