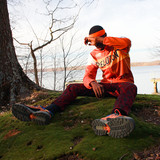 Ehiorobo’s chameleonic, expansive sound traverses the space between pop, experimental R&B, electronic, rap, jazz, and psych-rock. Equal parts soulful, poignant and zany, his output is as multifaceted as his unique personality and upbringing. Though often mistaken for a ‘futuristic producer moniker’, Ehiorobo is short for Ehiorobo Igiehon, a name that reflects his Nigerian heritage. Growing up in New Jersey, he remembers being an exceptionally quiet kid and embarrassed of how dissimilar he was compared to the concept of the black male that was often touted and celebrated in popular media. Making a conscious choice to embrace his eccentricities, Ehiorobo immersed himself in the world of video games and internet culture, making a sizable impact in a short amount of time, collaborating with artists such as Flamingosis, omniboi and Moon Bounce and releasing an intimate collection of songs on his debut LP, Limeade.

Ehiorobo’s unconventional art and effervescent spirit is indicative of his desire to leap outside of any comfort zones and continue moving forward. After a year that has taken its toll, Ehiorobo is making his triumphant return with three new standalone singles, and an ambitious full-length project on the horizon. With the intent to “make others feel at home within themselves”, Ehiorobo’s new material emanates a vital source of energy, solace and adventure that serves as a reminder to us all — we can be more than one thing at once. www.ehiorobo.us