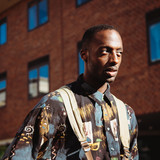 Ehiorobo’s chameleonic, expansive sound traverses the space between pop, experimental R&B, electronic, rap / hip-hop, jazz, and psych-rock. Equal parts soulful, poignant and zany, his output is as multifaceted as his unique personality and upbringing. Though often mistaken for a ‘futuristic producer moniker’, Ehiorobo is short for Ehiorobo Igiehon, a name that reflects his Nigerian heritage. Growing up in New Jersey, he remembers being quiet and perplexed by how dissimilar he seemed compared to the concept of the black male that was often touted and celebrated in popular media. Making a conscious choice to embrace his eccentricities, Ehiorobo immersed himself in the world of video games and internet culture, making a sizable impact in a short amount of time, collaborating with artists such as Flamingosis, omniboi and Moon Bounce and releasing an intimate collection of songs on his debut LP, Limeade.

In the summer of 2021, Ehi had made his triumphant return from a four year hiatus away from official 'Ehiorobo' track releases with three standalone singles (“Jay Ventura”, “Bloodsports” & “Munstar”) as well as dynamic collaborations with artists such as Sky Society, AR Ferdinand and Monstercat staples, Icarus Moth and Deffie. With an almost uncanny prolificness, Ehiorobo is now ready to reveal a wildly ambitious full-length project, Joltjacket, consisting of 18 tracks of the most far-reaching yet distilled material in his catalog, out everywhere on December 10, 2021.