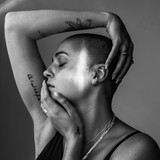 London-based independent multidisciplinary artist, Cat Couture, was born in the UK with Trinidadian, Venezuelan and British heritage. Spending her formative years in Switzerland she signed to Sony Music Switzerland in 2014, releasing her debut single “Bitching” produced by Flo Goetze and Phillipp Schweidler from Department Of Noize.   Since parting ways with her former label, Cat Couture has founded her own Production Company, Amoroso Films, under which she has directed Music Videos for many of London’s up and coming Artists such as Shaé Universe, NAHLI and Kyra. Couture has also focused her attention towards painting and spoken word, and has been working on her new music with producers Steve Solomon and Maxime Obadia, which she is set to release in early 2022.   For more information visit www.Cat-Couture.com