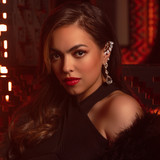 Salma is a multidisciplinary gifted singer/songwriter with a unique style to every song, always with the bent toward R&B infected, dance-oriented pop. It’s a great example of dedication and perseverance. Born and raised in Coahuila, México in 1995, she grew up singing and dancing since she was 12. Then started doing musical theatre, and that's when she knew she wanted this forever. She started doing covers in 2015 on social media, when, in the summer of 2020, Salma won a TikTok challenge by Leon Leiden where the best voices from the internet community were sought to collaborate with him on the viral hit "Gitana (feat. Jeis, Pao Alvarado & Charly Romero)" which now has more than 30 million streams. Salma got signed as an exclusive artist for the acclaimed record label Warner Music México with whom she released her first single “Venus", written and performed by her. In 2021, Salma has released different singles such as “No Es Mi Culpa", produced by multi-award winning producer Ettore Grenci and written by her; she also participated in a collaboration with singer Juan Vegas “Lo Que Dices Tú”, with Callejo “Celos” and now, her most recent song “Mala” with Taylor Diaz. Salma is considered one of the biggest pop promises in the Mexican Music Industry, with several releases to come out in the remainder of the year, she will rectify her enormous talent and great voice trough them. Salma is currently in the studio composing her new EP which will be out this year.