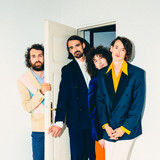 The story around Hearts Hearts is one full of twists and turns. While early releases drew a picture of a group of introverted sound-nerd poets, with time the band found their own language. In 2014 the four young musicians signed to the prestigious label Tomlab where they released their debut album, "Young"(2015) following on with "Goods / Gods"(2018). After playing shows all over Europe the band drifted through substantial change and reconsidered, where does their drive for creating music come from? This simple question makes their third album „Love Club Members“ (Parramatta, 2021) the story of an inner relief, of long-held wishes, and is likely to end up as the soundtrack of your summer. For Fans of: OSKA