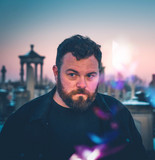 Man of the Minch

Featuring Man of the Minch

Over the past few years, Man Of The Minch - the musical alias of Glasgow based singer-songwriter and instrumentalist Pedro Cameron - has become one of the most exciting names at the forefront of Scottish folk music. Blending traditional Celtic sounds with personal, profound storytelling, Man of the Minch has already picked up his fair share of fans and followers. Winner of Up and Coming Artist of the Year at the 2019 Scots Trad Awards, he is breathing new life into traditional music whilst staying true to what makes that music so timeless. A well known collaborator on the folk scene, he has performed as a vocalist and fiddle player with the likes of Finn Anderson, Broken Chanter and Rachel Sermanni. He is also the founder of Bogha-frois: Queer Voices in Folk, a project which brings together musicians from across Scotland’s LGBT+ community. The release of his double A side singles "Undertow" and "Better Off Alone" garnered extensive radio airplay and acclaim, including being named one of the Top Country/Americana Songs to Hear Now by Rolling Stone magazine. Whether he’s on stage solo, his songs pared back to simple acoustic guitar and his resonant, heartfelt vocal, or accompanied by a full band, the same songs dressed up with sparkling pop and electronica and belted out to the back of the room, Man of the Minch stands alone. An important voice in the contemporary Scottish music scene, and one you won’t be able to get out of your head.