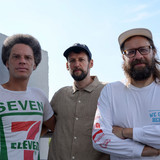 Having released their debut album Ei ole helpoo back in 2014, Helsinki-based indie rock band Gim Kordon are finally releasing new material again.   Gim Kordon performed their first gig at the Kuudes Aisti festival in Helsinki in 2012, which was headlined by Sonic Youth legend Kim Gordon. The band’s name is naturally an homage to the lead singer (who was also given a Gim Kordon pin at the festival).   With music that mixed ‘90s-inspired guitar-based American alternative rock with Finnish rock, punk and sensitively primitive poetics, the band reached number 13 on the Finnish charts with their debut album and played at the biggest Finnish festivals, including Flow Festival and Sideways. Gim Kordon also warmed up for American alternative legends Superchunk. Following their debut album in 2014, the band released the single Vieläkin on ikävä (“It Still Makes Me Sad”) in 2015, after which the band members took a break for several years due to work commitments.   Now, six years after the release of their debut album, Gim Kordon is back again. While the band’s original bassist, Lasse Kiehelä, is focusing more on his work as a football trainer and on his other bands, his place is being taken by new bassist Janne Nissilä, who has played with Elias Gould, Gracias and Vesta; he is also the former bandmate of Aleksi Pahkala from the days of Mummypowder and The Duplo