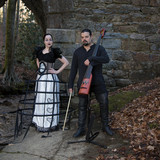 Formed in 2006, Valentine Wolfe is the combined effort of Sarah Black and Braxton Ballew. Drawing inspiration from all things Victorian, including literature, poetry, and history, and blending them with their musical proclivities and sensibilities and new media (such as Hannibal and Penny Dreadful), their music has found particular favor amongst the Steampunk set and crowds of the macabrely inclined. Braxton plays an electric upright bass which he currently runs through a guitar amp. There are no guitars in any of the music. Just many intriguing layers of a bass doing all the different sounds a bass can do. But in a genre dominated by airships and gearwork, tophats and goggles, they follow the back alleys of streets lit with yellowed gaslamps, casting shadows long against the walls; where Jack the Ripper stalked his victims, where Dracula walked with Mina.

Together they've provided the drama and the grandeur of the gothic at conventions all up and down the East Coast.