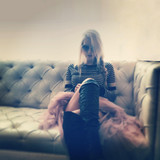 of Verona is an acclaimed indie band that has toured the world, released several award winning collections of music and has had over 50 television and film placements. Their debut album, The White Apple, was written, produced and mixed by the band at their Los Angeles studio and is a collection of songs about realizing what is real and what is an illusion and learning to tell the difference; It's about letting go of the things that cannot be changed. Their sound can best be described as a blend of alternative pop with an electro soul heartbeat.

The second single off The White Apple, Dark In My Imagination, has received play on many tastemaker stations such as KCRW, KROQ and WNYC and was #1 on the influential Hype Machine popular chart. The band also puts on an epic live show with a hypnotic visual element.