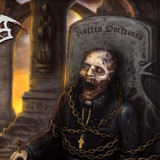 THROBBING PAIN from Hamburg were founded at the beginning of 2008. At that time, still with clear influences from thrash metal, the musical direction towards death metal was already clear. After the first album "HANG DRAW AND QUARTER" was released in 2011, singer Mario and guitarist Peter left the band and were replaced by Thede (Ex-Eradicate / Violence Unleashed) on vocals and Alex on guitar. In 2014 followed with "GRAVE NEW WORLD" their next release and with it a musical direction correction with course towards Death Metal of the old school in the style of bands like Bolt Thrower, Asphyx, Entombed or Obituary. Drummer Benji left the band in 2015 and was replaced by Hölk. After a longer rest, THROBBING PAIN now get the death tank rolling again and present their next death metal bullet "ROTTEN DOCTRINES". With banging uptempo passages and heavy doomy parts, musically it continues right where the