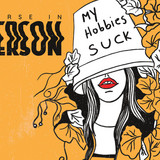 Worse in Person is a four-piece indie-rock band from Seattle, WA. In 2019 Rian Rustvold (vocals, guitar) teamed up with college roommate Hunter Gabriele (drums), and Michelle Tanco (bass) to try their hands at an indie rock project. Early in 2020 the band began playing around their hometown of Seattle, and added Sean Matson (guitar) to the combo. Worse in Person's sound takes influence from 90s grunge and alternative (Nirvana, Beck, Radiohead), 00s indie rock (Weezer, Mother Mother), along with modern influences such as FIDLAR, Car Seat Headrest, and The Beths. During the pandemic Worse in Person has been exploring new creative avenues in their songwriting and production. Their latest single, The Spins, is a sonically dense, hard hitting indie-rock song with a spacey atmosphere. Their debut EP "My Hobbies Suck" was produced during the summer of 2020 while the band isolated itself from each other. It was mixed and mastered by Luke Culbertson.