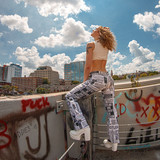 Summer Belt is a captivating songwriter, vocalist, and instrumentalist currently living in Nashville shaking the city with a unique and distinctive splash all her own.

She brings the cheeky bold vigor of 80s bands straight out of your speakers. Combining her love of classic rock with her own modern alternative ambition; your ears are instantly taken down a path of guitar driven forces with explosions of eclectic greatness between. Summer has the ability to induce humans into their favorite high energy moments that really get adrenaline pumping. She has performed internationally in places such as Nashville, NYC, and Ibiza, Spain. Summer grew up in rural Indiana where she began studying classical piano at the age of 3 and songwriting at the age of 12. Her debut album, Save The World, was recorded when she was 14 and she began performing locally soon after. In the following years she continued working on a variety of projects, winning multiple awards including Berklee Songwriters Showcase as well as winning Battle Of The Bands. In June of 2018 she released a long time favorite single, “My Name Is Disaster”. Summer has now joined forces with Brain Candy Management who dropped her highly anticipated single “Red Wine and Cyanide”. With this song came a suspenseful music video inspired from 1950’s Marilyn Monroe era. As of late August Summer dropped the ultimate carefree banger, "Trigger Happy". Buckle up and look out - new music is always in the works.