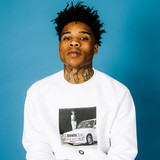 Circumstances shape us. In the face of adversity, we either give up or push harder. Brokeasf chose to push harder. He has already racked up millions of streams and views on his own with no proper promotion. The 17-year-old Florida rapper has stayed down and true to himself, making music with no regrets or apologies at all. “I have my own way of doing things,” he exclaims. “So many people are out here trying to be someone they’re not. They’re in this for the wrong reasons. I’m not reaching like that. I’m not clout chasing. I ”In 2019, he began spitting on Instagram and built up a following for fierce, focused, and fiery freestyles. He engaged an active fan base as, “People knew me from the streets, so my posts would get a lot of shares,”he states. Brokeasf ignited 2020 with the single “Comments.” Within a couple of months, it generated millions of streams in the US. On the track, he bodies an ominous beat punctuated by beeps with his fast