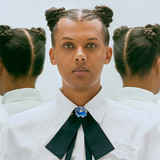 Paul Van Haver (Stromae) is a Belgian singer-songwriter-composer born in 1985 in Brussels. In 2009, he founded the creative label Mosaert - an anagram of Stromae - in Brussels, accompanied by his artistic director Luc Junior Tam, to mark the launch of his first album, “Cheese”. Since the beginning of his career, he has wanted to produce his own music as a way to maintain greater artistic independence. This means that his label will oversee everything, from production to artistic direction and from visuals to videos, not forgetting the staging of costumes. In 2012, as his second album was being prepared, Paul Van Haver met Coralie Barbier, a Belgian fashion designer. Her arrival would mark a turning point in Stromae's way of dressing. His second album, "Racine Carrée", encountered an unexpected level of success and became a great adventure which lasted 3 years. It can be summed up with the following figures: 12 songs for the most part composed, written and performed by Stromae&nbsp;; 4 million copies sold across the world&nbsp;; 7 videos which received one billion total views on the Internet&nbsp;; 209 live concerts attended by over 1.7 million spectators in Europe, North America,

South America and Africa. In 2014, taking inspiration from Stromae’s costumes, they decided to launch a clothing line, under the same name (Mosaert). Today, Stromae is continuing to produce music and collaborate with other artists too. www.mosaert.com