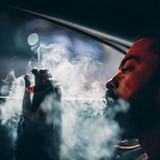 Better known by his stage name Gangis Khan aka Camoflauge, is an Award Winning Independent Canadian Rap/Hip Hop recording artist, songwriter, and actor of Portuguese-Indian descent. Formerly signed to notable Wu-Tang Clan member Raekwon's ICE H2O Label. In 2006 he independently released "Return of the Red Eye", followed by the 2007 release of "Pandora's Box". Which put him up to the top ranks of underground Canadian MCs. He quickly made a name for himself in the Canadian hip hop scene with his distinct sound and swagger.After attracting the attention of the US hip hop scene & being offered a record deal with Wu-tangs Raekwon and his Canadian Label ICE H2O in 2011, they recorded multiple projects and performed shows across Canada and the United States with Camo opening up for Wu-Tang Clan, Noreaga, and Snoop Dogg. He has since released timeless bangers and visuals time and time again. He continues to release music for both the Indian & Hip Hop communities with his 2020 releases "2 step" Ft. Deep Jandu and "Drip" ft King Dapz with the video released in early 2021.