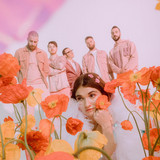 An intensely personal reflection on growth in unexpected places, MisterWives’ new album SUPERBLOOM marks a moment of major transformation for frontwoman Mandy Lee and her bandmates: Etienne Bowler (drums), William Hehir (bass), Marc Campbell (guitar), Jesse Blum (keys, trumpet, accordion), and Mike Murphy (saxophone). The New York City-bred band’s third full-length and first album for Fueled by Ramen, the 19-track epic finds MisterWives greatly expanding their already-adventurous sound, introducing new textures and colors to their magnetic form of indie-pop. On the album’s soul-stirring title track, MisterWives close out SUPERBLOOM with a moment of pure triumph and a profound sense of possibility. With its chorus including a lyric Lee later adopted as a mantra in times of self-doubt (“I deserve congratulations, ’cause I came out the other side”), “SUPERBLOOM” draws much of its power from its graceful arrangement of so many potent elements: soulful horns and luminous piano melodies, hard-hitting rhythms and gospel-choir harmonies. That joy ultimately infuses all of SUPERBLOOM, instilling even the most anguished songs with an irrepressible radiance and warmth. And in sharing personal struggle with so much honesty and open-heartedness, MisterWives hope to spark a similar courage in each listener.