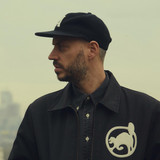 As Fracture, London-based Charlie Fieber records highly energetic, funky drum'n'bass with choppy breakbeats and insistent basslines. He's been an active presence on the scene since the early 2000s, when he began releasing singles as one-half of Fracture & Neptune, his duo with Nelson Bayomy. Releases from the pair appeared on labels like Droppin' Science, Ohm Resistance, Outsider, and Inperspective Records. Fracture began releasing solo tracks in 2006, and dallied with dubstep around 2007 with tracks on the Compound One label. Fracture & Neptune started Astrophonica in 2009 and issued most of their subsequent output through the label, including the 2011 digital compilation Retrospect: A Decade of Fracture & Neptune. As a solo artist, Fracture landed releases on well-known drum'n'bass labels like dBridge's Exit Records and Goldie's Metalheadz. Around 2012, he began fusing drum'n'bass with the then-emerging juke/footwork sound, initially under his side project Dawn Day Night, then continuing as Fracture. In 2016, he participated in the debut album by Richie Brains, an Exit Records collective that also contained Om Unit, Alix Perez, and Sam Binga, among others. Fracture's 2016 Hype Tracks EP featured a collaboration with Teklife-affiliated footwork producers DJ Spinn and Taso, and he worked with another Teklifer, DJ Earl, on a track for Astrophonica's 2017 compilation Gradients. ~ Paul Simpson, Rovi