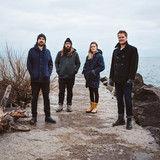 The Wilderness of Manitoba

Featuring The Wilderness of Manitoba

The Wilderness of Manitoba prefers to characterize itself as an evolving entity and founding member Will Whitwham is the last man standing. For the band’s new album, Across The Dark, the vocalist/multi-instrumentalist stepped up to write and produce all the songs himself. “The Wilderness of Manitoba is a collective whose sound is open to change as long as songwriting and harmonies remain at the forefront. It also relies heavily on a strong female voice to carry half of the lead vocals; my favourite instrument and one that I'll never be able to learn!” says Whitwham. From the band’s inception, it has redefined itself with every new release; from Hymns of Love and Spirits through When You Left The Fire, Island of Echoes, Between Colours and the band’s various EPs. The evolution of their sound has run the gamut from four part harmonies and its initial chamber folk sound to duo lead vocals and an expanded sonic palette ranging from cinematic indie pop to anthemic folk rock. The current live band includes vocalist/guitarist Jenny Berkel, bassist/vocalist Tavo Diez de Bonilla and drummer Marshall Bureau. “The touring and recording members bring fresh eyes and open ears. Playing with new people always brings a greener, more inspired revitalization simply because it's change. And change is great if you don't fight it too much.” Across The Dark is a little closer to what the present line-up of the band is delivering live. “We've experimented a lot in the studio over the past few albums while maintaining a core sound as a touring act”, says Whitwham. “And while that sound has always remained intact, it hasn't always been easy in the studio just because there are so many options with multiple outcomes. I limited myself a little more on this record and ended up with something tighter.” One of the things the album title reflects is feeling that you've committed to something sonically and you're confident enough to 'cross the dark' with it. It’s not dissimilar to the touring life and its 'down in the trenches' mentality. Anyone who has toured extensively knows there are long stretches and dark roads (especially in Canada), but it can also be the most rewarding when you're happy with the band and the shows you're delivering. If night after night, you feel that the benefits far outweigh the kilometres, then you're successful enough to justify the madness. The other half of ‘across the dark’ refers to risk and also to the search: constantly trying to find something and the yearning for someone as a main theme in the songs themselves. In its eight year existence, the Wilderness of Manitoba’s strengths come as a direct result of the wealth of traveling the band has done; playing a multitude of festivals and touring in the UK, the Netherlands, Germany, the USA and Canada. “The live show,” says Whitwham, “is an in-the-moment portrait of the band and its efforts.” Those efforts were recognized when the Wilderness of Manitoba was nominated for a JUNO Award. Summing things up, Whitwham says, “There is no lacking in the quantity of musical ideas and we’re looking forward to getting back to performing as a live entity.”