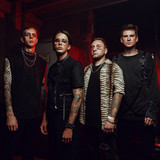 Wildways is one of the most fascinating and unique success stories on the Russian rock scene, which is celebrated far beyond its homeland. The band, which comes from Bryansk and is fronted by charismatic Anatoliy Borisov, performs in Russian and English and constantly expands its international fanbase. In 2020 alone the band has changed history by becoming the first Russian metal band to get signed by a major label (Warner Music Russia), became the first metal band to perform at the leading Russian talk show “Evening Urgant”, supported Bring Me The Horizon on stage and released “ANNA”, that made waves in dozens of countries. The album has deepened Wildways’ trademark sound by offering even more personal lyrics and switching anger to mindfulness. That’s exactly what rock music should sound like in the 21st century.